This article is from The Atlanta Jewish Times. To read the full article, click here.

Middle East politics are roiling the Emory University campus after fake “eviction notice” flyers were placed on doors of dorms and off-campus apartments as part of an annual pro-Palestinian student protest.

According to various sources, the flyers were posted on the dorm doors of Jewish and non-Jewish students. Flyers also were posted at the off-campus Emory Point apartments.

The flyers, which appeared on April 2, had been approved by a university office, Emory Residence Life, which later ordered them removed because they violated a policy against posting flyers on the doors without student consent.

A university spokeswoman said that multiple departments within the school continued to investigate the incident.

“I find it racist, anti-Semitic and absolutely offensive,” said Rabbi Russ Shulkes, executive director of Hillels of Georgia, told WSB-TV. Shulkes described the reactions he received from students as ranging “from anger to fear to security issues to how could Emory allow this to take place?”

“In reviewing this incident, we found no evidence that individual students or a particular group were targeted,” the university said in a statement issued April 3. 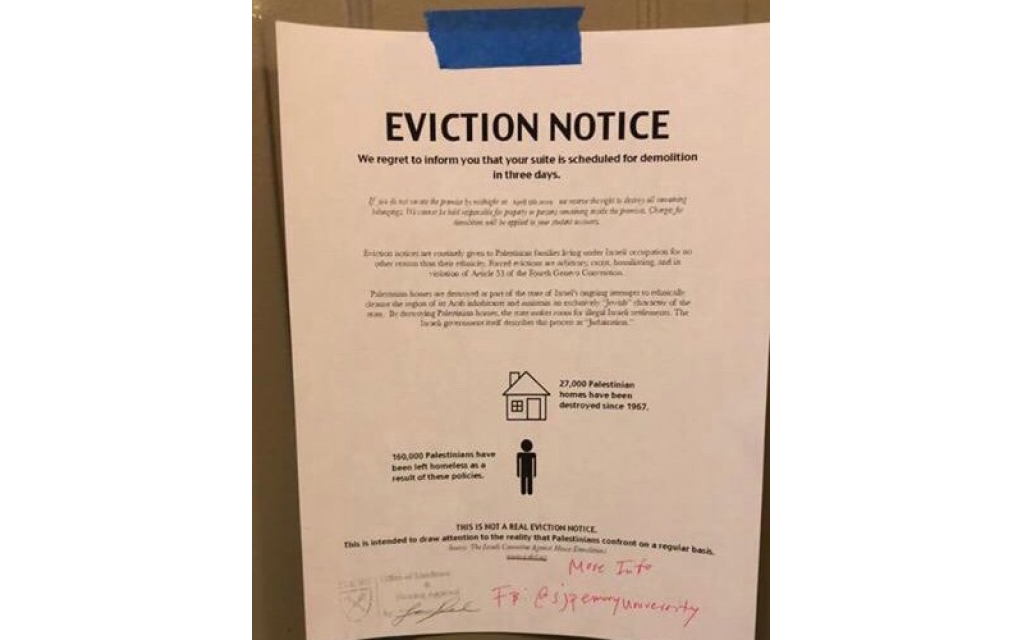 The official-looking notices, which stated that the dormitory would be demolished in three days, were posted by Emory Students for Justice in Palestine, as part of Israeli Apartheid Week. The group’s Facebook page says that it is “an organization dedicated to supporting a sustainable and just peace in the internationally recognized lands of Palestine.”

The flyers read: “Palestinian homes are destroyed as part of the state of Israel’s ongoing attempts to ethnically cleanse the region of its Arab inhabitants and maintain an exclusively ‘Jewish’ character of the state.”

A disclaimer at the bottom of the flyer advised that the warning was not real.

Similar flyers have been posted on dorm doors of other campuses in recent years.

The annual anti-Israel event was taking place the same days as Emory Israel Week, sponsored by Emory Eagles for Israel, which describes itself as “a pro-Israel cultural organization on campus that aims to educate students about the history and culture of Israel.”

A statement was sent campuswide April 2 on behalf of Paul Marthers, Emory’s interim vice president for Campus Life and vice provost for enrollment management. It said that the flyers “were posted as part of a communication campaign by a student organization concerned with human rights in the Middle East.”

“While we want to create an environment where the free expression of ideas and open, vigorous debate and speech are valued, we must also recognize that the manner in which we communicate can have consequences. In this case, Campus Life is investigating the incident and has engaged with students who created the flyers. While the flyers have been removed from unapproved areas, it does not erase their impact. My hope is we can learn from this incident to bring together in meaningful conversation the many points of view that are needed to advance our understanding of complex issues in the world.”

Dave Cohn, director of Emory Hillel, issued a letter to students, parents and alumni on April 2, outlining Hillel’s response. “We’ve spent the day wrangling with the challenges posed by such an action. While we support the right of every student in our community to express themselves freely, foremost in our response has been defending the safety of our students from this intrusion on their privacy and security,” Cohn said. That response included meeting with university officials and with Emory’s police department, to ensure that Israel Week events were not disturbed.

The university’s response was criticized by professor Kenneth W. Stein, director of the Emory Institute for the Study of Modern Israel and president of the Center for Israel Education. In an email to the AJT, Stein said that the statement issued in Marthers’ name “was full of process but shallow on substance.”

“A university administrator stamped approval and by doing so sanctioned the content of the ‘eviction’ notice. There is no wiggle room for the university’s bad judgment; it was bad judgment. Period. It is clear that the person, persons, or committee that approved the posting did not realize or understand the anti-Semitic contents of the flyer,” Stein said. “Sanctioning the posting of this flyer and issuing a shoddy letter of explanation does not absolve the institution of complicity in making students’ lives anxious, and in fostering a notice with anti-Jewish content. …It is hoped that the university letter is the first response and not its final statement on this matter. In the parlance of Passover, “it is not sufficient.” It is not at all close to dayenu,” Stein said.

On its Facebook page, the Emory-Israel Public Affairs Committee posted a statement April 3 that said, “While we recognize the need to discuss human rights crises worldwide, we believe that SJP chose to bring light to a complicated and nuanced situation in a narrow-minded way. … It was unwise of SJP to act without considering the detrimental effects the fake eviction notices would have on residents. Thankfully, Emory residence life staff and the apartment complex management have taken down all of the flyers.”

Sophia Weinstein, president of E-IPAC, told the AJT that Emory College of Arts and Sciences Dean Michael Elliott said that he hoped to set up a meeting between university officials and representatives of several campus Jewish groups.

In an email to the AJT, Emory student Isabella Cantor said that some reports “exaggerated what is happening on our campus.”

“These articles have said things like, ‘If you’re Jewish and thinking of sending your son or daughter to Emory University, apparently this is the sort of thing your child can look forward to.’ As a proud Jewish Emory student, I feel that it is my responsibility to set the record straight. Emory University has and absolutely still continues to be an ardent supporter of our Jewish community. One organization’s actions do not represent our university. One office within the university’s actions also do not represent our university. What represents our university is the commitment to respect, evidence-based dialogue, and support of all students,” said Cantor, who is chair of Jewish life on the Emory Hillel board.

Emory’s handling of the situation also has been criticized outside of the university.

“The anti-Israel activists who passed out these notices are creating tension, intimidating and isolating students, and fostering a hostile atmosphere on campus. The academic environment should be a place where constructive dialogue and discourse about the Israeli-Palestinian conflict can thrive, not a place where perspectives regarding the conflict infringe on students’ personal space, the ADL letter said.

Shaked Angel, the Greater Atlanta regional director for the Israeli-American Council, released a letter that he sent to Sterk.

“Freedom of expression is an invaluable and fundamental component of any academic institution, however, it is also understood that this free exchange of ideas must not come at the expense of student safety. The eviction notices’ duplicitous tactics lack civility and thoughtfulness and allow for no such dialogue. An environment of open dialogue, replete with mutual respect and understanding, is critical to the continuity of this free exchange of ideas. I request that you, Emory University’s President, condemn the aforementioned violations of these understood rights and policies, in the interest of the safety of all students and community members on Emory University’s campus.”

An organization called Alums for Campus Fairness issued a statement stating that “We can not and will not tolerate direct targeting and explicit discrimination of Jewish students on campus.”

According to its website, “Alums for Campus Fairness (ACF) is a non-profit organization that brings together alumni to counter anti-Semitism that is affecting far too many university and college campuses, while also promoting an open and fair dialogue on campus regarding the Arab-Israeli conflict.”

Kelly Stewart, Georgia state director of Christians United For Israel, also issued a statement that said: “The tactics of the anti-Israel crowd are appalling. Harassing fellow students is never acceptable. This latest action at Emory University shows once again that Israel’s detractors will stop at nothing to demonize the Jewish state. Such intolerant behavior should be met with swift condemnation by Emory University administrators.”