This article is featured in The Algemeiner by ACF-Oberlin Chapter Leader, Melissa Landa

Dear Members of the Barnard Community:

On Tuesday, October 3, Ali Abunimah will speak at Oberlin. His talk is titled, “How to End Israeli Apartheid.” Mr. Abunimah is notorious for his anti-Semitic vitriol, which seeps through his attacks on the world’s only Jewish state. Former Senior Foreign Policy Fellow at Media Matters Action Network and left-wing columnist M.J. Rosenberg said, “it is clear that he cannot stand Jews.” The Louis D. Brandeis Center for Human Rights: “As a veteran professional activist, he usually delivers smooth presentations that tend to obscure the fact that his often invoked demands for ‘justice in Palestine’ require the injustice of doing away with the world’s only Jewish state in order to replace it with another Arab Muslim-majority state.” Abunimah regularly compares Israel to Nazi Germany, a comparison that has been deemed antisemitic by the Obama State Department.

University of Maryland Professor Melissa Landa was dismissed from her position in the Education College last spring immediately after concluding a grievance against the college.  UMD’s administration is now conducting an investigation to determine whether Landa was fired in retaliation or subject to any other form of discrimination.  Landa is ACF Oberlin’s Chapter Leader and a vocal proponent against all forms of hatred on campus including anti-Semitism and anti-Zionism.

The appointment of Professor Bruce Duthu as Dean of Faculty at Dartmouth has drawn swift condemnation by the Jewish and pro-Israel community.  Duthu co-authored a boycott resolution against Israeli academic institutions by NAISA (Native Americans and Indigenous Studies Association). Read more: 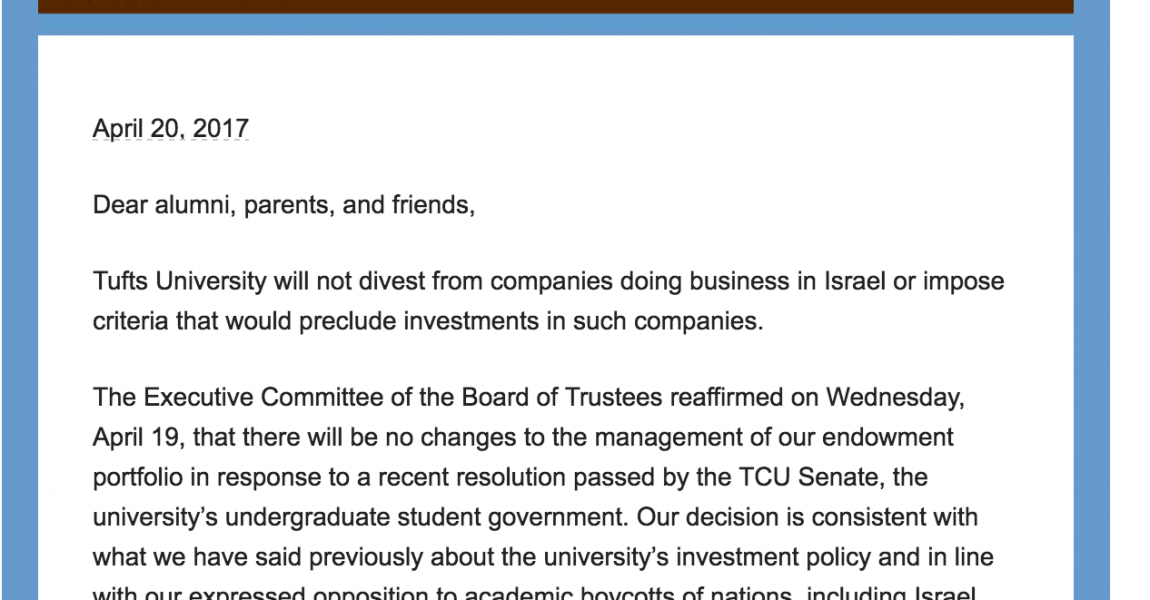 Tufts University Board of Trustees Unequivocally Rejects Divestment from Israel

Tufts’ Students for Justice in Palestine (SJP) used ambush tactics to push a BDS resolution through the Senate (the student government).  Adopting the maneuvering of other SJP chapters, the Tufts group arranged for the vote to take place the day before a major Jewish holiday  — Passover — to  ensure that many Jewish students would not be able to participate in the resolution debate.